As the use of electronics in vehicles has increased in the last decades, so have the cars’ capabilities of monitoring and recording what is going internally as well as externally. Connected cars are capable of sharing these kinds of information with other devices, especially other cars, via the internet. They are a quickly growing in numbers part of the larger Internet of Things (IoT) ecosystem. It is projected that by 2025, there will be over 400 million connected cars in operation, up from some 237 million in 2021. This rapid rise will however have to contend with the global semiconductors chip shortage of 2021, which is tipped to impact connected cars as automakers are unable to meet an increased vehicle demand.

It is estimated that there are over one billion motor vehicles in use worldwide. With over 60 million new cars sold annually, the size of the global car parc is expected to continue increasing in the coming years. This rising number of automobiles and trucks in circulation requires more intelligent forms of urban transport, and today’s smart cities are providing the smart infrastructure that is needed for the implementation of connected car programs. It was forecasted that in 2022, about 158 billion U.S. dollars will be spent on smart city initiatives globally, enabling the further deployment of connected vehicles on our streets.
Consumers worldwide are already starting to adopt connected car services as part of their daily life. This is especially visible in China, where nine in 10 drivers reported using these features at least occasionally. Connected cars are believed to be safer, more economic in fuel consumption and thus more environmentally friendly, as well as better at navigating the roads and avoiding traffic jams and busy streets, alleviating traffic congestion in cities. Moreover, connected car technology allows for better diagnostics, maintenance, and fleet management of vehicles, making carpooling and car-hailing services more efficient.

Nexus with electric and autonomous vehicles

Connected car technology goes hand-in-hand with automotive electrification and autonomous technologies. Many new car models sold worldwide are equipped with these technologies and more are expected to reach the global market in the coming years. Sales of vehicles with at least a Level 3 of autonomy are projected to increase by a staggering 2,900 percent in this decade, from less than two million in 2020 to 58 million units in 2030. Most major auto manufacturers have announced plans to either phase out or severely limit the production of diesel- and petrol-fueled cars by 2030 and instead focus heavily on the manufacturing of electric vehicles.
The companies most likely to benefit from these trends include autonomous vehicle startups such as Zoox and Momenta, as well as established car manufacturers such as General Motors, Toyota, Nissan, Volkswagen, Ford, and Tesla. Other players, namely automotive infotainment firms like Japan’s Panasonic and Pioneer, and companies offering fleet management systems, including the California-based Trimble Navigation and TomTom of the Netherlands, will very probably profit from these trends as well.
This text provides general information. Statista assumes no liability for the information given being complete or correct. Due to varying update cycles, statistics can display more up-to-date data than referenced in the text.

Martin Placek
Research expert covering transportation and electronics
Get in touch with us now
Published by Martin Placek, Dec 8, 2021

Number of connected cars in operation in 2021
237m 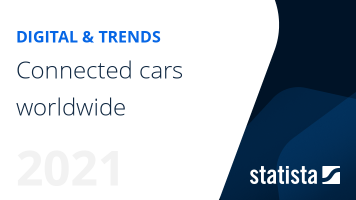 The most important key figures provide you with a compact summary of the topic of "Connected cars worldwide" and take you straight to the corresponding statistics.