Published by Statista Research Department, Nov 23, 2022
Russia, the fourth-largest emitter of carbon dioxide (CO2) worldwide, is considered to be both suffering and benefitting from climate change. While still holding on to its fossil fuel industries, the country gradually expands renewable energy investment and climate initiatives. In 2019, the country ratified the Paris Agreement, an international treaty on global warming. However, Russia's greenhouse gas (GHG) emissions target of 30 percent below 1990 levels by 2030 was criticized as "critically insufficient" by the non-governmental organization Climate Action Tracker, since that threshold was already met in 2017. The government approved a national action plan for adaptation to climate change in 2020. Moreover, 350 billion Russian rubles were earmarked in the renewable power plants construction from 2025 to 2035.

What are the effects of climate change in Russia?

As the mean surface temperature gradually increases, Russia faces a higher risk of wildfires, which burned over nine billion hectares of forest area in the Far Eastern Federal District alone in 2021. Natural disasters and infections could become more common, presenting threats to ecosystems, agriculture, and public health. Siberia has seen heatwaves in the summer in recent years. However, the Laptev Sea ice extent was larger in October 2022 that in the same month in the previous two years. The Arctic accounts for one fifth of Russia's territory and is home to 2.4 million citizens, according to the Russian Federal Statistics Service. Thaw of permafrost, which is rich in natural resources and is particularly relevant for the mining industry and the extraction of oil and gas, would imply higher economic costs.

How could Russia benefit from climate change?

The temperature increase in the Arctic would enable the Northern Sea Route, which has opened around July in recent years. Saving up to 14 days compared to the route over the Suez Canal and the Indian Ocean, the pathway transported nearly 35 million metric tons of cargo in 2021. However, several foreign companies publicly refused to use the route due to concerns over the Arctic's environment and in response to the Russian invasion of Ukraine. Another potential benefit of the Arctic warming to Russia could be new opportunities for agricultural and trade development in the region.

In the following 8 chapters, you will quickly find the 47 most important statistics relating to "Climate change in Russia". 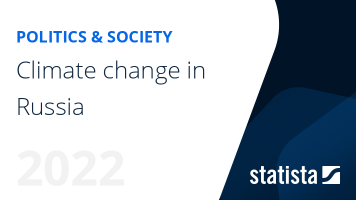 The most important key figures provide you with a compact summary of the topic of "Climate change in Russia" and take you straight to the corresponding statistics.