Published by Statista Research Department, Jun 13, 2022
India is among the fastest-growing economies in the world, sometimes on the cusp of leading the pack that consists of the United States and China. Limited and concentrated resources across the world have made trade an important part of a country’s economy. A big influence on the need for importing and exporting goods is the rapid evolution and growth in what people need and desire. On the other hand, trade provides employment and raises standards of living. India’s export market had for long been a major contributor to its economy, which made it one of the leading exporters worldwide.

India’s strong diplomatic ties with major countries around the world have allowed for profitable trade over the years. Among the ASEAN countries, Indian exports to Singapore were the largest. The leading country receiving the largest share of Indian exports was the United States valued at about 58 billion U.S. dollars. On the other hand, the Netherlands had the highest value of Indian exports within the European Union.
India’s major exports included engineering goods, petroleum products, gems and jewelry, and drug formulations. Additionally, the value of the engineering goods exported from India was valued at over 5.6 trillion Indian rupees. Other major exports include textiles, rice, spices, tea, coffee, and tobacco in agriculture, along with iron and steel.

Although being the world’s third-largest wheat producer, India has imposed restrictions on wheat exports in global markets. The restriction was imposed because of damage to wheat crops caused by strong heatwaves. This posed a threat to India's food security compounded by a surge in wheat prices due to the Russia-Ukraine war.
Just days after banning wheat exports, the Indian government restricted the export of sugar globally. Despite being the second-largest sugar producer globally, to keep prices in order, the sugar exports would be limited to 10 million tons for the marketing season. Only sugar mills and dealers with special authorization from the government will be able to export sugar until October 2022. The rising inflation has impacted consumer sentiment both in rural and urban India.

In the following 3 chapters, you will quickly find the 25 most important statistics relating to "Exports from India". 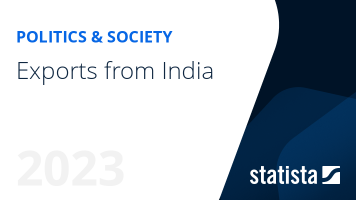 The most important key figures provide you with a compact summary of the topic of "Exports from India" and take you straight to the corresponding statistics. 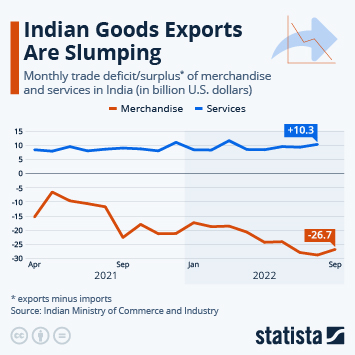