Published by
M. Shahbandeh,
Aug 12, 2022
Nuts are some of the world’s most popular snacks and come in many varieties, such as peanuts, pecans, pistachios, almonds, and hazelnuts. Many nuts are defined as seeds, while others are botanically defined as fruits. When eaten in moderation, nuts can be quite healthy and a fine source of protein, fat, fiber, etc. During the 2021/2022 period, over 5.13 million metric tons of tree nuts were produced worldwide. Within the tree nut category, the almond production volume (kernel basis) was by far the highest in that period; over 1.6 million metric tons of almonds were produced that year. Walnuts and cashews, which stood in second and third place respectively within the same measured period, each reached over 800 thousand metric tons.

During the 2020/2021 period, the leading country in terms of global walnut production was China. The United States ranked second, producing over 700 thousand metric tons that marketing year. China was also the largest producer of peanuts worldwide, with a production of about 18 million metric tons in 2020, almost double the volume produced by India, the next leading peanut producer. Almost 70 percent of the world’s pistachios were cultivated in the United States in 2021/2022.

In 2021, the world’s leading exporter of edible nuts was by far the United States, which exported close to 1.6 billion kilograms that year. Turkey accounted for the second-largest edible nut export volume, which was about 280 million kilograms that year. Other major nut exporters in 2021 included Indonesia, China, and Chile. On the other hand, 2021’s leading importer of edible nuts was Germany, which imported over 2.3 billion U.S. dollars’ worth of nuts within the same year.

There are numerous health benefits associated with eating nuts. In 2020/2021, over 1.5 million metric tons of almonds were consumed worldwide.

In the following 5 chapters, you will quickly find the 30 most important statistics relating to "Nut industry worldwide". 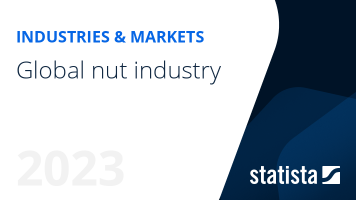 The most important key figures provide you with a compact summary of the topic of "Nut industry worldwide" and take you straight to the corresponding statistics.