The largest newspaper publishing company in Sweden is Bonnier, which generated revenue of 4.2 billion Swedish kronor in 2020 with its daily newspapers Expressen, Dagens Nyheter, and Sydsvenskan. Norwegian publisher Schibsted, the owner of Aftonbladet and Svenska Dagbladet, came second with revenue of 2.35 billion Swedish kronor that year. Bonnier’s Dagens Nyheter ranked was the leading daily city newspaper in Sweden in 2020 with 544 thousand readers, followed by Schibsted’s Svenska Dagbladet with just under 350 thousand.

In 2020, daily newspaper readership in Sweden was at its highest since 2012. That year, 68 percent of Swedes responding to an annual survey read daily papers on an average day. Whilst the hike in 2020 could be partially due to the COVID-19 outbreak, the share of individuals engaging with daily newspapers on a typical day remained above the 60 percent mark in almost every year over the last decade, which is a good sign for publishers.

Daily newspaper subscriptions in Sweden also grew slightly in 2020. Although most popular with adults aged 65 or above, data showed that over 50 percent of readers aged nine to 14 years old also subscribed to a daily newspaper, up by ten percent from the percentage recorded in the previous year and above the national average.

A study held in 2021 found that 30 percent of internet users in Sweden paid for online news that year, ten percent higher than the share recorded in 2017. The same report revealed that Swedish news audiences were among the most likely to have paid for online news worldwide, with almost double the share of Swedes having done so in the last year compared to the percentage of respondents from neighboring Denmark.

Additionally, 19 percent of Swedish news consumers aged 16 to 74 years of age reported accessing news via paid print or digital news subscriptions everyday, whereas for several other European countries in the study including Germany, Great Britain, and France the share who said the same was under 10 percent.

The inclination among Swedes to pay for news, whether this be print or digital, is positive for companies seeking to gain their subscriber base. However, whilst Swedish audiences may be more likely than some of their European counterparts to invest in news, Sweden’s newspaper industry has been losing revenue each year since 2014. The newspaper market in Sweden is not dissimilar from others around the world in this regard, and readers paying for news content will not stop the downward revenue trends.
This text provides general information. Statista assumes no liability for the information given being complete or correct. Due to varying update cycles, statistics can display more up-to-date data than referenced in the text.

Revenue of the newspaper industry in Sweden
13.14bn SEK 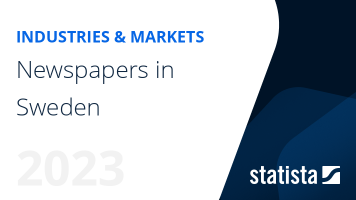 The most important key figures provide you with a compact summary of the topic of "Newspapers in Sweden" and take you straight to the corresponding statistics.