Reading newspapers in Denmark has been declining for several years. In 2018, the daily newspaper coverage among Danes aged 12 years and older amounted to 33 percent. By contrast, over half of the population in the Scandinavian country used this medium on a daily basis in 2010. Thus, national newspapers recorded about one million readers on weekdays and Sundays in 2018, compared to roughly two million users in 2010. Similarly, the average household spending on newspapers decreased from more than a thousand Danish kroner in 2016 to 940 kroner as of 2017.
Meanwhile, the share of internet users reading or downloading news online in Denmark recently increased. Especially younger people tend to use digital newspapers. To give an example, roughly two third of 16 to 24-year-old Danes read or downloaded news in 2016. One year later, the share of individuals was already 89 percent. The online news consumption rate of elderly people also grew, from 52 percent to 68 percent in the same period. However, printed newspapers still account for the highest share of the total newspaper sales revenue in Denmark.

The largest Danish national daily newspaper was B.T.metro (former MX/Metroxpress) as of the first half of 2019. Over 600 thousand people read Berlingske Media’s newspaper weekly. Including tabloid B.T., daily newspaper Berlingske, and the weekly Weekendavisen, Copenhagen-based Berlingske Media was the highest-reached publisher regarding printed newspapers in Denmark in 2018. JP/Politikens Hus, with its brands Politiken, Jyllands-Posten, as well as Ekstra Bladet, ranked second, but closely behind. The largest regional and local newspaper company in the country was Jysk Fynske Medier.
This text provides general information. Statista assumes no liability for the information given being complete or correct. Due to varying update cycles, statistics can display more up-to-date data than referenced in the text. 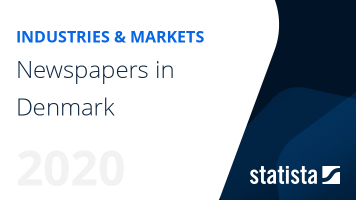 The most important key figures provide you with a compact summary of the topic of "Newspapers in Denmark" and take you straight to the corresponding statistics.