Over the past years, Norwegian newspaper companies have lost several billion kroner in revenues. However, in 2018, publishers in this sector halted the decline, when they generated roughly the same revenues as in 2017, at around 11.5 billion Norwegian kroner. Though printed newspapers’ revenue decreased, this fall was offset by increasing revenues from digital newspaper editions. Newspaper advertising revenue fell by 119 million kroner in 2018, a decline of nearly three percent compared to the previous year. Here too, the reduction was recorded for printed versions, while advertising revenues from digital editions grew.
As of August 2019, the newspaper publishing company with the highest generated turnover in Norway was by far Schibsted, which owns many brands not only in Norway but also in Sweden. Based on circulation, its nationwide daily newspapers Aftenposten and Bergens Tidende, released in Oslo and Bergen, respectively, are some of the most popular printed and digital newspapers in the country. VG (short for Verdens Gang), also published by Schibsted, is the best-known tabloid in Norway. The newspaper with the third highest circulation was Dagbladet. Its publisher Aller Media AS is a subsidiary of the large Danish media company Aller Holding.

Another major Norwegian company in the newspaper industry is NHST Media Group, the owner of the weekly Morgenbladet and the country’s largest business newspaper Dagens Næringsliv. Furthermore, the Norwegian newspaper landscape is characterized by several local and regional brands. Polaris Media, for example, owned 29 regional and local media houses as of December 2019. The most popular regional newspaper is Adresseavisen, reaching the sixth highest circulation in 2018. Based on the number of readers, it even ranked fifth among all printed newspapers released in Norway.
This text provides general information. Statista assumes no liability for the information given being complete or correct. Due to varying update cycles, statistics can display more up-to-date data than referenced in the text.

Revenue of newspaper companies in Norway 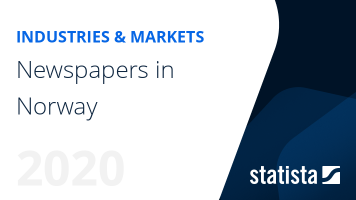 The most important key figures provide you with a compact summary of the topic of "Newspapers in Norway" and take you straight to the corresponding statistics.