Published by
Amy Watson,
Sep 19, 2022
The newspaper market in Europe is much like many others in the world in the sense that digitization has detrimentally affected sales, circulation, and readership. It is true that print newspapers have less appeal than in previous years and are of limited use to readers, and according to a survey, are the least used news source in five European countries. Newspapers are in competition with free online outlets and struggle to find their place in a fast-paced market populated by digitally competent consumers. Advertising spending is also stagnant, not only in Europe but on a global scale.

Investing in print newspapers, a format no longer in regular use by most of European society, is arguably not lucrative for advertisers. In fact, iIn 2020, newspaper advertising spending growth in Western Europe was as low as -23.3 percent. Whilst the COVID-19 outbreak made that particular year an unusual one, spending in 2021 grew by less than two percent, and annual declines are expected over the next few years. The story is similar in Central and Eastern Europe, albeit slightly bleaker. Newspaper ad spending in the CEE region declined by over 27 percent in 2020 and then failed to bounce back the following year and is expected to drop again in 2022.

The popularity of the written press among citizens in EU 27 countries decreased over the last decade, with penetration rates of daily printed press consumption dropping from 37 percent in 2012 to 21 percent in 2022. It is true that younger consumers are especially disinterested in reading print papers – but engagement is often also low among older generations. A survey on newspaper readership in the Netherlands found that over 60 percent of adults aged 65 years or older read printed papers each day, but when looking at those aged 50 to 64 years old, the figure drops to 40 percent. Parallels to this trend can also be seen in Norway, with Norwegians in their mid-50s to mid-60s much less likely than older respondents to read print newspapers on an average day. Over in Spain, engagement with daily newspapers was low in general, and comparable patterns are also evident in several other European economies.

Newspapers are no stranger to challenges but will need to adapt fast if they wish to survive. A focus on local news for local people can help here, as well as new policies to generate revenue, such as placing in-depth opinion content behind paywalls for interested parties to access on a one-off or regular basis. This is often considered more ethical than introducing a sweeping subscription model, which can, if executed poorly, limit access to quality journalism to those who can afford it.

In the following 10 chapters, you will quickly find the 59 most important statistics relating to "Newspapers in Europe". 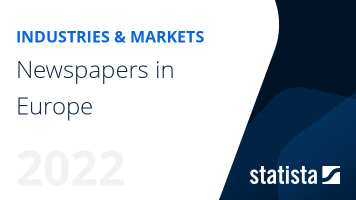 The most important key figures provide you with a compact summary of the topic of "Newspapers in Europe" and take you straight to the corresponding statistics.