E-commerce keeps expanding in the Netherlands, where the number of quarterly online purchases grows steadily. Fashion — comprising clothes, shoes, accessories, and sportswear — continues to outperform other product categories, as it is the most purchased merchandise in the country. From an international frame of reference, the Dutch online fashion market is prospering. The Netherlands ranks as the thirteenth largest fashion e-commerce market in the world by revenue, behind other European countries such as the United Kingdom, Germany, France, and Italy. The Dutch fashion e-commerce market is valued at 10.6 billion U.S. dollars in 2022 and is expected to make up over half of the total apparel sales by 2025.
According to a survey, over half of the Dutch shop for fashion on the internet. Almost 40 percent of e-shoppers buy apparel at least once a month, and over 20 percent even two or three times per month. An estimated 1,272 euros will be spent on clothing and footwear per person in 2022. The trend is going to remain positive, as the figure is forecast to reach 1,406 euros by 2025.

Unlike Dutch digital retail as a whole, there is a firm presence of foreign companies when it comes to online fashion in the Netherlands. Based on e-commerce revenue generated in the Netherlands, Zalando is the market leader in fashion. In 2021, the German marketplace had a revenue of over 800 million U.S. dollars, outdoing other international players like H&M and Zara. Despite Zalando's success in the Netherlands, e-commerce net sales are forecast to drop by over 150 million U.S. dollars in 2022. This could be attributed to the pending worldwide recession and the sharp revenue’s decline retail companies are facing.

Domestic websites Bol.com and Wehkamp.nl are also very popular but serve as generalist platforms, as they also sell other types of merchandise, like electronics and household items. E-commerce sales of Wehkamp are also expected to dwindle in 2022, as well as other Dutch online apparel retailers.

Both Vinted and the Chinese fast fashion retailer Shein overtook the Zalando app for the top places. In 2021, Vinted experienced over 1.4 million app downloads, followed by Shein with 1.2 million downloads. In turn, Zalando, did not hit the million mark that year.
This text provides general information. Statista assumes no liability for the information given being complete or correct. Due to varying update cycles, statistics can display more up-to-date data than referenced in the text.
Published by Statista Research Department, Sep 26, 2022

Number of online clothing retailers in the Netherlands 2018-2022

E-commerce penetration in the Netherlands 2022-2027, by product category

Leading fashion and apparel websites in the Netherlands 2022, based on visit share 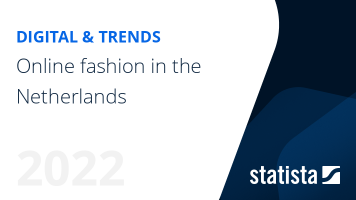 Go to report Online fashion in the Netherlands
Top Seller

The most important key figures provide you with a compact summary of the topic of "Online fashion in the Netherlands" and take you straight to the corresponding statistics.