Germany is the most populated country in Europe, making it one of the largest players in the real estate market. Investments in the residential real estate market alone were close to 25 billion euros between September 2020 and September 2021. Germany’s home ownership rate is a little over 50 percent, which is one of the lowest in Europe. As a result, renting is very common and more than half of Germans live in rental apartments.

Within the commercial sector, office accounts for almost half of the investment activity. In recent years, Germany’s largest city, Berlin, has continued attracting companies and talent and growing at an overwhelming speed. The city’s sprawl has also influenced the office market, taking approximately 365 square meters in take-up in the first half of 2021. Berlin’s runner-ups are the rest of Germany’s big 7 – Munich, Frankfurt am Main, Dusseldorf, Hamburg, Stuttgart, and Cologne, with a total of 1.3 million square meters in office take-up. A common effect of this high demand for prime office is the decrease of the property rents to property cost ratio, also referred to as yield hardening.

Industrial real estate in Germany is equally distributed across manufacturing, logistics, and wholesale

Another commonly known fact is that Germany’s economy is strongly reliable on manufacturing and export. This is easily noticeable in the distribution of light industrial and logistic take-up – approximately 31 percent was in the manufacturing asset class, whereas 32 percent was in wholesale and retail. The distribution of industrial, storage, and logistics space in the biggest German cities provides an even more interesting perspective to the German economy and regional specificities. While Hamburg, which has one of the biggest harbors in Europe, has the dominant share of take-up with logistics service providers and transport facilities, Munich and Stuttgart have an overwhelming share of industrial, production and craft businesses take-up.

This text provides general information. Statista assumes no liability for the information given being complete or correct. Due to varying update cycles, statistics can display more up-to-date data than referenced in the text.
Published by Statista Research Department, Oct 7, 2022

Value of industrial and logistic investment in Germany 2019, by major city

Average rent price of residential property in Germany 2012-2022, by city 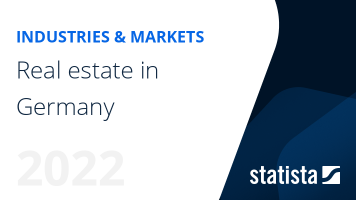 The most important key figures provide you with a compact summary of the topic of "Real estate market in Germany" and take you straight to the corresponding statistics.