Used as a term to describe the world’s six largest and most influential publicly-traded oil and natural gas producers – Big Oil refers to BP, Chevron, Eni, ExxonMobil, Shell, and TotalEnergies. The group has its origins in the so-called Seven Sisters, who controlled most of the known global oil reserves and as a result dominated the petroleum market in the mid-20th century. Following multiple mergers, the Seven Sisters now form four of the six Big Oil companies and have become some of the largest companies in the world. Big Oil is distinct from the term Oil Majors, which encapsulates the largest oil companies by tanker chartering. State-owned counterparts to Big Oil are oil and gas producing heavyweights such as Saudi Arabia’s Saudi Aramco, Russia’s Gazprom, and China’s Sinopec.

In 2021, U.S.-based Chevron had a daily liquids production volume of roughly 1.8 million barrels. Of this, 858,000 barrels were pumped from oilfields in the company’s home market, an increase of over 50 percent since 2015.
Across the Atlantic, French TotalEnergies, which rebranded itself in 2021 to reflect the company’s shift towards green energy production, reported a combined liquids production of 1.5 million barrels per day. Fellow Europe-based Eni was able to report similar levels of hydrocarbon production through its operations in Europe, Africa and Asia.
Like TotalEnergies, most European supermajors have begun diversifying their investment portfolio in order to reflect the growing prioritization of clean energy sources within the European Union.
This text provides general information. Statista assumes no liability for the information given being complete or correct. Due to varying update cycles, statistics can display more up-to-date data than referenced in the text.
Published by Statista Research Department, Jan 31, 2023

Leading global oil and gas producers based on net income 2022

Leading global oil and gas producers based on revenue 2022

Leading oil and gas producers based on market cap October 2022 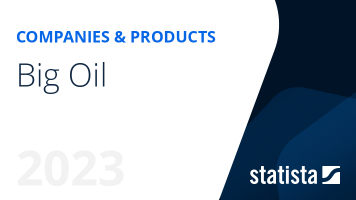 The most important key figures provide you with a compact summary of the topic of "Big Oil " and take you straight to the corresponding statistics.