The domestic toy markets in Scandinavia are very different. In general, the toy industry is constantly changing and dependent on trends.

In Denmark, the number of enterprises in the manufacture of toys was relatively high compared to other Scandinavian countries. In recent years, it increased from 720 companies in 2009 to 859 companies in 2019. That same year, there were roughly 4.2 thousand people working for these toy manufacturing enterprises. Generally, the domestic toy consumer price index remained stable in recent months. In July 2021, the CPI of games, toys and hobby supplies in Denmark was measured at 107, where 2015 equals 100. The CPI measures changes in the average cost of most consumer goods and services. It also reports inflation and deflation (rising and falling prices).

In 2020, Lego was the top ranked toy company in the world based on revenue, ahead of such companies as Bandai Namco, Hasbro, and Mattel. Lego is a Danish toy production company headquartered in Billund, Denmark. Besides manufacturing LEGO-brand toys, the group operates several amusement parks around the world (LEGOLAND Resorts) as well as their own retail stores. From 2009 to 2016, the company’s average employee number increased constantly, peaking at almost 17 thousand people by the end of this period. In the following years, numbers declined somewhat. In 2019, the number of employees amounted to roughly 16 thousand. As of 2020, it grew again and peaked at over 17 thousand employees.

In Denmark’s neighboring country Norway, the number of establishments in the manufacture of games and toys was significantly lower. In the past years, the highest number of companies was registered in 2017, reaching 37. In the following two years it decreased to 34 toy manufacturers. As of 2019, Norwegian manufacturers generated a total revenue of 21 million Norwegian kroner through toys and games sales. The consumer price index of games, toys and hobby supplies in Norway as an annual average was constant within this period. In 2020, it was measured at 108.7, with 2015 equaling 100.

From 2008 to 2019, in the Swedish industry for games and toys, the number of registered companies ranged between 200 and 250. During the period of consideration, the most games and toys enterprises were recorded in 2019, reaching 250. That same year, the company number in the toyshop industry was even higher and amounted to 356. Regarding the CPI of toys, it was similar to other Scandinavian countries – in the past months it did not change significantly and was measured at 121.51 in December 2020, with 1980 equaling 100.
This text provides general information. Statista assumes no liability for the information given being complete or correct. Due to varying update cycles, statistics can display more up-to-date data than referenced in the text.
Published by M. Ridder, Dec 13, 2021

Net turnover of the toyshops industry in Sweden 2008-2020 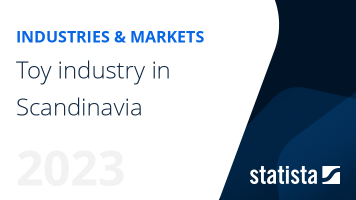 The most important key figures provide you with a compact summary of the topic of "Toy industry in Scandinavia" and take you straight to the corresponding statistics.