Sports in Italy - Statistics and Facts

Published by Statista Research Department, Dec 3, 2020
While the ancient Romans particularly enjoyed boxing, running and chariot races, data compiled by the Italian Society of Authors and Publishers show that soccer is by far the most popular sport in Italy today. In fact, most of the over 130 thousand sports events organized in the country in 2018 were connected to soccer. That year, soccer in Italy generated more than 2.37 billion euros in revenue.
Teams sports other than soccer also played an important role, registering more than four million admissions in 2018. Volleyball, basketball, and rugby were among the most practiced ones. In 2018, over 330 thousand athletes practiced volleyball in Italy. Similarly, about 140 thousand male athletes and 22 thousand female athletes played basketball in Italy in the 2017/2018 season. Moreover, the history of rugby in Italy goes back as far as the first years of the twentieth century. Overall, the turnover of teams sports other than soccer amounted to roughly 280.5 million euros in 2018, whereas the turnover of individual sports reached almost 198 million euros.

Looking at individual sports in Italy, the number of athlete memberships in the Italian Athletics Federation rose significantly from 2009 to 2019. Similarly, the number of athletes playing tennis in Italy increased from 2008 to 2018, and so did the revenue of the Italian Tennis Federation (FIT). Whereas most revenues of the FIT were generated by international events, the grant provided by the Italian National Olympic Committee (CONI) and member fees were essential sources of funding for cycling in Italy, as data published by the Italian Cycling Federation reveal.

Overall, Italy recorded roughly 10 thousand sports activity venues in 2018. Lombardy, the most populous region of the country, recorded the highest number of sports facilities in Italy. Most gyms in Italy were located in this region as of June 2019.

In the following 6 chapters, you will quickly find the 30 most important statistics relating to "Sports in Italy". 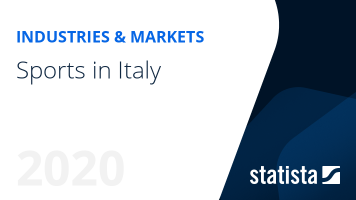 The most important key figures provide you with a compact summary of the topic of "Sports in Italy" and take you straight to the corresponding statistics.