Diet and nutrition in the Asia-Pacific region - statistics & facts

Published by Statista Research Department, Jan 19, 2022
Diets and nutrition throughout the Asia-Pacific region vary greatly and depend on many factors such as religion, food security, wealth, eduactaion, and emerging food trends. Some religions that are heavily practiced throughout the region avoid the consumption of certain animals and meats. Hinduism, which is among the most practiced religions in India, regards cows as a sacred symbol of life, so they are not consumed. A large share of Hindus also follow a strict vegetarian diet, opting not to consume any animal meat altogether. Islam is another religion that follows certain practices on diet and meat consumption, with many Muslims only eating foods that are halal. The emergence of new food trends and nutritional information becoming more widely available through varying channels has also likely made an impact on nutrition.

Effect of nutrition on health

On the one hand, obesity has become a growing problem across the region. Governments across the region have taken steps to tackle the obesity problem which the region now faces. Common measures that have been introduced include reducing sugar intake by replacing traditional ingredients with healthier alternatives and providing low or sugar-free alternatives to popular food and drinks.

On the other end of the scale, many people in the Asia-Pacific region suffer from malnutrition and undernourishment. The region is still plagued with hunger and food insecurity problems. The outbreak of the coronavirus in December 2019 appeared to exacerbate these problems further, as the production and distribution of food were disrupted by the pandemic.

The health and functional food market has established itself throughout the region, especially in China, South Korea, and Japan. Consumers appear to want food and drinks which enhance mood, increase mental alertness, and aid healthy gut function. Detox drinks and drinks beneficial to the immune system have also become a popular option. Additionally, vitamin supplements and foods with added protein have experienced a surge in popularity, becoming a normality in citizens’ daily lives.

Alongside health and functional food, the ready-to-drink market has developed in the Asia-Pacific region. Busier work schedules often demand convenient food and drink options. Countries such as Japan have taken advantage of this consumer need and have expanded their ready-to-drink non-alcoholic beverage markets.

The rise of vegetarianism and veganism has ricocheted across the world and has also gained traction in the region, particularly in the likes of Australia and New Zealand. Subsequently, the plant-based beverage market has increased dramatically throughout recent years. Restaurants and food chains have begun to provide plant-based alternatives to popular foods and beverages. However, given the diverse nature of the region, the plant-based diet is not yet widespread. Meat is still viewed as a luxury in certain Asia-Pacific countries. The price difference between plant-based alternatives and meat is possibly a factor as to why veganism has not managed to establish itself completely across the region.

In the following 4 chapters, you will quickly find the 26 most important statistics relating to "Diet and nutrition in the Asia-Pacific region".

Statistics on the topic
Country with the biggest vitamin, herbal, mineral, and supplement market
China
Most used channel to find out nutritional information
Social media
ASEAN country with the highest obesity prevalence
Malaysia 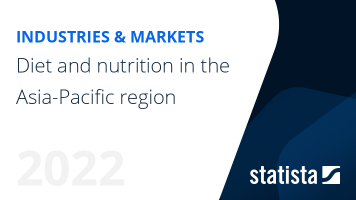 The most important key figures provide you with a compact summary of the topic of "Diet and nutrition in the Asia-Pacific region" and take you straight to the corresponding statistics.

State of health in the Asia-Pacific region