Published by
Eloise Trenda,
Oct 1, 2021
Thanks to a temperate climate in its Northern regions, and a Mediterranean one in the south, French farmers are able to grow a variety of vegetables, across over 215 thousand hectares of agricultural land. This continuously diverse and voluminous output has led France to establish itself as the third largest producer of fruit and vegetables in the European Union, behind Italy and Spain. The country is also the second largest producer of potatoes in Europe, after Germany. This dynamic market relies on various official labels and quality checks, useful for officials and regular consumers alike.
The consumption of fruits and vegetables is known to play a significant role in human health, protecting against cardiovascular diseases and certain cancers, for example. However, the consumption of vegetables among French people is far from reaching the 500 daily grams recommended by the National Nutrition Health Program (PNNS). Indeed, since the turn of the century, vegetable consumption has remained unchanged despite incentive campaigns organized by the government, such as the famous “Five a day”, for example.

The relatively high price of vegetables could be the reason behind limited consumption among the population. Indeed, while French households have not been purchasing more vegetables in recent years, they have been spending more money on them, especially if these are organic.
Still, the population is making connections between food, health, and the environment. Indeed, the seasonality of the product is seen as the most important criterion when purchasing vegetables, while an increasing amount of people are concerned with the origin of the product they purchase.
This trend towards sustainability is also certainly behind many French people’s dream of their very own fruit and vegetable garden.

In the following 4 chapters, you will quickly find the 36 most important statistics relating to "Vegetable consumption in France". 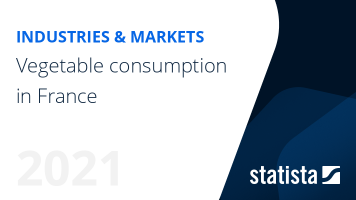 The most important key figures provide you with a compact summary of the topic of "Vegetable consumption in France" and take you straight to the corresponding statistics.