As mentioned previously, COVID-19 actively contributed to the e-grocery market development in the country. An average receipt for e-grocery peaked at 2,189 Russian rubles in July 2020. As of December 2021, a cumulative number of online grocery orders amounted to over 220 million - over a threefold growth compared to the previous equivalent period.

The Russian food retailer X5 Retail Group accounted for the highest net sales at roughly 2 trillion Russian rubles for 2021. X5 Retail Group owns the Pyaterochka brand - a chain of proximity stores, hypermarkets under the Karusel brand, supermarkets, and online grocery under the Perekrestok.ru brand. Due to the pandemic and the increasing digitalization of the market the company launched food delivery services Dostavka.Pyaterochka and Perekrestok.Bystro. In 2021, VkusVill was named the leading online food retailer by overall performance countrywide.

Though the coronavirus outbreak has facilitated the high demand for online food delivery in Russia, the market is set to keep the positively developing trend and reach a size of nearly 3.5 billion U.S. dollars by 2024. During the self-isolation period, Russian consumers increased their spending on online food orders, and preferences adjusted to the lockdown reality as well. Delivery Club and Yandex.Food were the two most popular food delivery services in the country. Nearly half of the surveyed customers reported having ordered food from named delivery service providers in 2021.

Delivery Club, one of Russia's biggest food delivery services launched in 2009, initially operated as a marketplace. The company reported 22 million food orders delivered in the third quarter of 2021 only. Another major player, Yandex. Food, was established in 2018, after acquiring food delivery service Foodfox the year before. It operated in 112 Russian cities and one city in Kazakhstan. Yandex.Food operates in 112 cities in Russia and one city in Kazakhstan, working with more than 14 thousand restaurants and food retailers countrywide. Yandex accounted for a 171 percent revenue growth for the taxi and food-tech segment by the fourth quarter of 2020.
This text provides general information. Statista assumes no liability for the information given being complete or correct. Due to varying update cycles, statistics can display more up-to-date data than referenced in the text.
Published by A. Melkadze, Nov 24, 2022 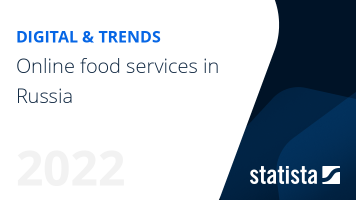 The most important key figures provide you with a compact summary of the topic of "Online food delivery services in Russia" and take you straight to the corresponding statistics.