Responsible for almost three quarters of Europe’s production of foie gras and over two thirds of the world’s, France is currently the biggest player when it comes to this product. To put it simply, foie gras is the liver of a duck or a goose specially fattened by force-feeding. According to French law, using this force-feeding method is mandatory to obtain the protected appellation “foie gras.”
The process is straightforward: for 10 to 18 days, birds are locked in cages or pens and forced to ingest large quantities of food twice a day. They are fed from 450 grams to one kilogram of a mixture made of corn, water, and additives. This practice is called “gavage”, and its goal is to make the birds’ livers grow as fast as possible.

Especially popular around Christmas and New Year’s Eve, foie gras can be prepared and eaten in various ways: raw, semi-cooked, or cooked; it can be consumed alone, but also as an ingredient in more elaborate recipes. On average, French people eat around 220 grams of foie gras per year, with a sizeable peak during the festive season.
As emblematic as this product is, foie gras is particularly affected by controversies surrounding the aforementioned force-feeding method. Animal rights activists denounce the conditions under which foie gras is obtained, and their lobbying has resulted, on the one hand, in legal bans in various countries, and on the other hand, in the appearance of substitute products, such as “faux gras,” for instance.

Another issue faced by foie gras producers is avian influenza. Until 2015, around 19,000 tons of foie gras were produced annually. However, that year, the H5N1 variant of the bird flu epidemic hit France. While many ducks and geese were affected, this strand of the virus was dangerous to mostly chickens. Unfortunately, after this first scare, the H5N8 virus - another variant - spread across the country. This time around, the strand of the virus was deadly to both ducks and geese. As a result, millions of birds were euthanized between 2016 and 2017.
While the production of goose foie gras has yet to recover, the production of duck foie gras initially picked up again in 2018, before falling once more. Indeed, in the last trimester of 2020 French authorities reported a new outbreak of the H5N8 virus in the country. This resulted in the death of thousands of birds, and the final body count is yet to be established.
This text provides general information. Statista assumes no liability for the information given being complete or correct. Due to varying update cycles, statistics can display more up-to-date data than referenced in the text.

Eloise Trenda
Research Expert covering global food topics with a focus on the French, Spanish, and LATAM markets
Get in touch with us now
Published by Eloise Trenda, Jan 18, 2022

First producer of foie gras in the world
France

Per capita consumption of foie gras in France
207g 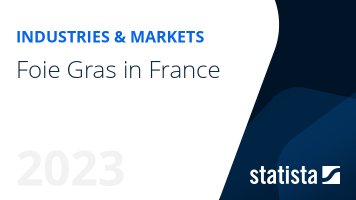 The most important key figures provide you with a compact summary of the topic of "Foie gras France" and take you straight to the corresponding statistics.