Published by
Eloise Trenda,
Oct 1, 2021
As in many countries, meat plays a significant part in the local culture and economy in France. Indeed, many regional food specialties, such as cassoulet, boeuf bourguignon or coq au vin heavily rely on this product. While the amount of meat consumed yearly per capita has not changed dramatically since the 1970s, the way the population consumes it has shifted significantly: prices, retailers, and favorite kinds of meat are some aspects of meat consumption that have steadily evolved throughout the years.
Within a context of overall price increases and a trend towards less meaty diets, many categories of meat have witnessed a decrease in home consumption. Pork is one example. Even though it is still the type of meat most consumed among French people, its consumption is going down, and poultry is fighting hard to take this spot with help from its highly dynamic processed segments. Regarding beef, the panic generated by the mad cow disease crisis in the 1990s and the environmental implications linked to its production can begin to explain its fall.

On the other hand, relying on studies linking a heavy consumption of red meat with issues such as high blood pressures, cholesterol, and certain cancers, health organizations worldwide are encouraging increased consumption of vegetables over meat products. However, global meat consumption per capita is still predicted to remain stable in the next decades. This forecast combined with the expected growth of the world population lead to the conclusion that demand for meat is likely to overtake production. Furthermore, this resource problem is also bound to affect the environment. Indeed, meat production is mainly based on animal husbandry, which requires constant use of energy, land and water. The production of one kilogram of beef requires about 15,000 liters of water, while about 4,300 liters of water is needed to produce one kilogram of chicken. To face these upcoming issues, some agri-food companies are looking into insect-based proteins and cultured-meat, which the population does not seem excited about just yet.

In the following 6 chapters, you will quickly find the 46 most important statistics relating to "The meat sector in France".

Statistics on the topic
Consumption of meat per capita in France
84.40 kg
Type of meat most consumed among French people
Pork
Volume of duck and goose foie gras produced in France
11.7k t 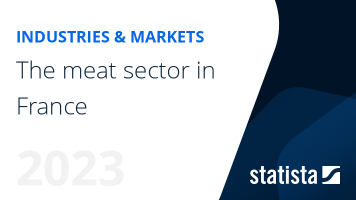 Go to report The meat sector in France
Top Seller

The most important key figures provide you with a compact summary of the topic of "The meat sector in France" and take you straight to the corresponding statistics.