Published by
José Gabriel Navarro,
Nov 22, 2022
Movie theaters across the European continent became emptier after the pandemic. In 2021, Europe, the Middle East, and Africa (EMEA) collectively accounted for little more than 23 percent of the world's box office revenue. A decade earlier, that share was about 10 percentage points higher, with EMEA alone accounting for roughly one-third of the global figure and standing above even the United States and Canada. Still, four of the top 10 box office markets in 2021 were European economies, namely the United Kingdom, France, Russia, and Germany – the latter tying for 10th place along with Mexico. Sources expect some of the region's leading cinema markets to experience a boom in filmed entertainment revenue in the near future. Spain, Italy, France, and Russia were all forecast to double their results within that segment between 2020 and 2025, marking the present decade as an opportunity for tremendous growth following the coronavirus outbreak.

Despite promising predictions, the continent entered the 2020s struggling to attract moviegoers back to theaters. Europe's box office gross increased by more than 40 percent to approximately 3.7 billion euros in 2021. Yet that value amounted to only 42 percent of the 8.8-billion-euro revenue recorded in 2019. That remark is not a mere generalization. At the end of 2021, every European country recorded a decrease in box office gross compared to two years earlier. Even some of the region's most robust economies, such as Germany, Turkey, and Italy, registered a two-year decline of over 60 percent – therefore, worse than the continental average. However, the impact on local productions varied. In Turkey and Poland, domestic films' share in total cinema attendance decreased significantly between 2019 and 2021, falling behind one-quarter in the latter year. Meanwhile, France, Czechia, Denmark, and Serbia reached new heights, with domestic titles accounting for over one-third of their movie ticket sales.

The performance of each country's filmmaking industry also differed before and during the pandemic. The number of tickets to domestic films sold in Russia continued a declining trend that preceded COVID-19. Between 2018 and 2021, attendance decreased by more than 30 percent. The number of movies made in the UK declined sharply in 2020 – but once again, the figure had already started to drop in 2018. On the other side of the Channel, however, a bounceback for the ages took place. France's feature film production reached record-high 340 movies in 2021, well above all annual numbers recorded throughout the 2010s.

In the following 8 chapters, you will quickly find the 33 most important statistics relating to "Film industry in Europe". 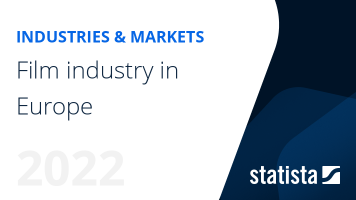 The most important key figures provide you with a compact summary of the topic of "Film industry in Europe" and take you straight to the corresponding statistics.

Movie industry in the U.S. & Canada

Movie studios in the U.S. & Canada