Console gaming is one of the oldest and most popular forms of gaming worldwide. Ever since the first home video game systems were released in the 1970s, millions of players have transformed their living rooms into personal arcades and delved into the animated worlds of Zelda, Super Mario, and the like. While technology has visibly advanced since the early days of console gaming and more players now favor smartphones and PCs over traditional devices, revenues of the global video game consoles market keep rising every year.

When comparing global gaming markets, Hong Kong, Spain, and the United States were the countries with the highest console gaming penetration rates worldwide. Taking a closer look at console gaming demographics in the United States, a recent survey showed that over 60 percent of gamers are aged between 20 to 39 years, whereas consoles are less popular with teens. Another ongoing trend in the world of console gaming is the use of subscription services. Newer generation consoles are no longer just analog devices but rather a gateway to unlimited online gaming content. Nintendo Switch Online and Xbox Live were the most popular gaming subscription services worldwide, with almost 50 percent of the consoles’ respective user bases subscribing to them.

Ringing in a new round of console wars

The global home console market is dominated by Nintendo, Sony, and Microsoft. In 2021, the Nintendo Switch held the lead in terms of game console unit sales worldwide, with titles such as Mario Kart 8 or Animal Crossing driving global demand. Nintendo’s other two handheld hits, the Nintendo DS and Game Boy, also rank high in the running for most-sold video game consoles worldwide. While only the PlayStation 2 has sold more units globally, Nintendo increasingly takes a backseat to Sony and Microsoft. The two manufacturers released their newest generation of gaming consoles in November 2020, and although historically PlayStation consoles have outsold Xbox devices, supply chain challenges for the PS5 and the increasing success of the Xbox Game Pass have given Microsoft an edge in the market right now.

What are the best-selling console games worldwide?

As of March 2022, Wii Sports remains the best-selling console game of all time at over 82 million shipments. Other noteworthy titles in the running for the world’s number one console game include Super Mario Bros., Mario Kart Wii, and other releases from Nintendo’s beloved Super Mario franchise. Looking at more recent releases, sports games like EA's FIFA series or Activision's first person shooter series Call of Duty are also high in demand. The latest edition of the long-running FPS series, Black Ops Cold War, also placed among the most popular games on the PlayStation 5 in the United States.
Platform-exclusive titles used to be one of the key factors for gamers when deciding which console to purchase, but times have been changing: a number of PlayStation exclusive hits such as Horizon: Zero Dawn or God of War have received PC ports, and beloved PlayStation flagship series like Final Fantasy or Persona are also getting re-releases for Xbox and Nintendo Switch consoles. As a counter to the "everything becomes available everywhere, eventually" flow of recent years, Microsoft's January 2022 move to purchase gaming company Activision Blizzard for 68.7 billion U.S. dollars has definitely shook things up a bit: Activision's games are immensely popular on PlayStation and consumers are worried about titles such as Call of Duty leaving the PlayStation system. As such, the platform wars and the battle for consumer's cash continues.
This text provides general information. Statista assumes no liability for the information given being complete or correct. Due to varying update cycles, statistics can display more up-to-date data than referenced in the text.

Game console with the most lifetime sales worldwide
PlayStation 2 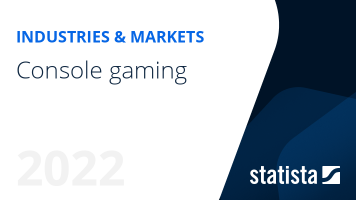 The most important key figures provide you with a compact summary of the topic of "Console gaming" and take you straight to the corresponding statistics.