Published by
Thomas Alsop,
Mar 17, 2022
Games consoles were a sensation when they were first released in the early seventies, transforming the home television into an arcade gaming machine. Today, next-generation game consoles, manufactured by the likes of Microsoft, Nintendo, and Sony, feature some of the fastest computing and graphics processors. These devices offer 4K and 8K resolution output, allowing users to play video games that take part in massive virtual worlds and compete against or co-operate with other players around the globe. While allowing users to control a game that appears on an electronic display remains the primary focus of game consoles, most modern devices can perform the same functions as a home entertainment system.

Of the all-time video game console sales, three of the top five are Sony products. The PlayStation 2 is the best-selling video game console of all time, with Nintendo’s DS and Game Boy rounding out the top three. Other competitors include Microsoft’s Xbox console family, although Sony has sold over twice as many of its PlayStation 4 console when compared to the Xbox One. This is a trend that is expected to continue with the next generation of PlayStation and Xbox consoles, with the PlayStation 5 outselling the Xbox X/S consoles since all the products were launched in late 2020. Currently, the Nintendo Switch console leads the way for current generation game consoles, with over 25 million devices sold in 2021 alone.

In the following 6 chapters, you will quickly find the 30 most important statistics relating to "Game consoles". 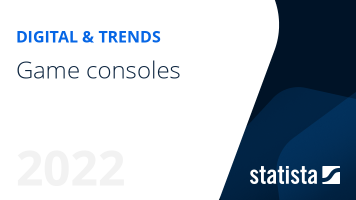 The most important key figures provide you with a compact summary of the topic of "Game consoles" and take you straight to the corresponding statistics.

XR: AR, VR, and the metaverse 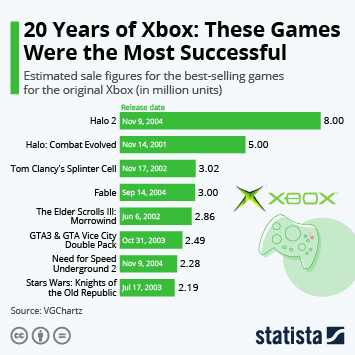 20 Years of Xbox: These Games Were the Most Successful 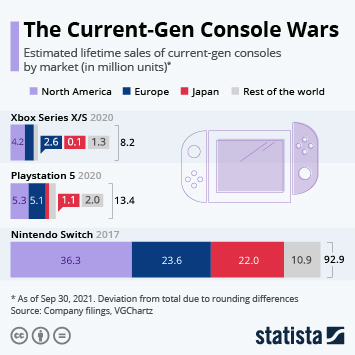