Published by Daniela Coppola, Oct 19, 2021
Online marketplaces dominate Italian e-commerce. As in other countries, marketplaces and large e-commerce platforms gather the most traffic, often outdoing smaller mono-brand online shops. Nowadays, the ability to purchase from a wide choice of products is seen as a key aspect of the shopping experience by one in two Italian online consumers.

The elephant in the room

Amazon is the unchallenged leader of generalist B2C marketplaces, counting over 30 million unique visitors as of September 2021. The Italian platform accounted for over two-thirds of desktop traffic of all e-commerce sites in Italy. The partnership between Italian small and medium enterprises and the e-commerce giant doesn’t come as a surprise. In 2020, the almost three thousand third-party suppliers based in the Lombardy region generated over 115 million euros in revenue abroad through Amazon.

In the B2C sector, marketplaces became popular in several verticals, although with some differences. In the consumer electronics segment, the physical distribution network seems the most relevant factor. Online shops of brick-and-mortar retailers like Mediaworld or UniEuro compete with big hardware and software groups, leaving limited space to pure marketplaces like the local ePrice. Among the non-food online platforms, Zalando is the most popular fashion marketplace, doubling Shein’s unique visitors.
The world of food marketplaces sees established grocery retailers but also the lively presence of successful newcomers. In the wine niche, the marketplace Tannico generated about 40 million euros revenue in 2020, an over 80-percent increase on the previous year.

Second-hand shopping is on C2C platforms

One in ten Italian online users preferred online sites for the resale and purchase of commodities, a growing habit in Italy but still behind most European countries’ usage rates. In any case, eBay is the most popular consumer-to-consumer (C2C) marketplace for second-hand items, with more than 760 thousand monthly active users on Android and about the same on iOS mobile devices. Books and clothing are the second-hand items attracting Italian online users the most, according to recent surveys.

In the following 5 chapters, you will quickly find the 23 most important statistics relating to "Online marketplaces in Italy". 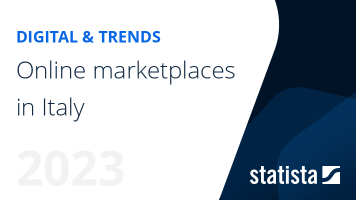 The most important key figures provide you with a compact summary of the topic of "Online marketplaces in Italy" and take you straight to the corresponding statistics.