Published by
Stephanie Chevalier,
Dec 5, 2022
Across the world, Amazon and eBay are the forerunners of online sales. However, at the beginning of the 21st century, both companies were busy expanding their operations in the United States, Europe, and China, while a homegrown player was quietly rising in Latin America. Launched in Argentina in 1999 amid a deep economic crisis, Mercado Libre defied all odds by laying the foundations of e-commerce in the region. Over two decades later, the company led by Marcos Galperín has become the most popular online marketplace among Latin Americans.

A long road ahead for foreign competition

Latin America's growing adoption of e-commerce in recent years has prompted several industry giants to seek a piece of the pie. Mexico and Brazil have played a defining role in this regard. In 2021, both were among the Latin American countries with the most visits to Amazon and AliExpress sites. Even so, regionally, the two marketplaces face stiff competition from local players and remain far behind frontrunner Mercado Libre. In addition, local websites remain buyers' top choice when spending their money online. By the end of 2022, domestic e-commerce spending in the region was expected to be more than five times higher than cross-border. Although shopping expenditure via international sites was forecast to increase by 20 percent in 2023, it would still account for less than a quarter of the total market that year.

Mercado Libre has inspired retailers across Latin America to go online. Chilean holding company S.A.C.I. Falabella is a case in point. The group, which already had an e-commerce segment for each of its stores, namely Falabella Retail, Sodimac, and Tottus, added online marketplace Linio to its portfolio in 2018. As part of its goal to compete as a genuine marketplace, the company took another strategic step in August 2021, integrating all its business units in Chile into a single platform.

In the following 7 chapters, you will quickly find the 37 most important statistics relating to "Online marketplaces in Latin America". 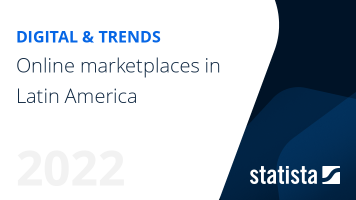 The most important key figures provide you with a compact summary of the topic of "Online marketplaces in Latin America" and take you straight to the corresponding statistics.