The art of bandes dessinées or Franco-Belgian comics, also known as the ‘ninth art’, is deeply engrained in the French cultural landscape. France has indeed established itself as one of the pillars of the comic book industry for almost a century in terms of both consumption and production. However, the French-language comic book sector is no longer confined only to French-speaking European countries and is adapting to the demands and expectations of readers around the globe.

Many French readers grew up reading Franco-Belgian comics, which remain one of the most widely read comic types. The movement gained in popularity after World War II thanks to publications such as Le Journal de Tintin and Le Journal de Spirou, whose characters became favorites among young and old consumers alike. While France and Belgium each have their own authors and comic artists, both industries merged due to their shared commercial and cultural context. Some of these comics performed extremely well overseas and achieved international fame, expanding the reach of and influence of bandes dessinées beyond their countries of origin.

Although the Franco-Belgian style of comics reigned supreme in the 20th century in France, foreign productions have slowly but surely attracted the attention of the French public since the beginning of the new millennium. While most consumers were familiar with the Marvel and DC universes, the sale of American comic books exploded over the past few decades, largely driven by the success of the Avengers and Justice League movie franchises. However, the industry’s boost in popularity is not limited to the Big Two publishers nor to the superhero genre, evidenced by hit titles such as The Walking Dead (Image Comics). At the same time, manga continues to delight French readers and sales are growing, particularly thanks to franchises such as Attack on Titan (Pika Édition).

While print is still the standard format used for reading comics, online consumption has been gaining traction among French readers in recent years. Although this trend can partially be attributed to French readers reading more books during lockdown, the blossoming success of digital distribution platforms such as Marvel Unlimited or ComiXology prove that online consumption is here to stay. These platforms offer access to a wide variety of comics on mobile devices for a monthly annual fee or on a single-title basis. Meanwhile, webtoons are also making waves and revolutionizing the way comics are read. Originated in South Korea, webtoons are especially well-suited for consumption via smartphones thanks to their vertical layout. New chapters are usually released every week, often for free and heavily relying on advertising. But, sometimes, consumers can pay for earlier access through a fast-pass system.
This text provides general information. Statista assumes no liability for the information given being complete or correct. Due to varying update cycles, statistics can display more up-to-date data than referenced in the text.
Published by Statista Research Department, Oct 20, 2022 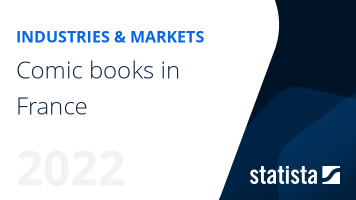 The most important key figures provide you with a compact summary of the topic of "Comic books in France" and take you straight to the corresponding statistics.