Xbox is a video game brand created by Microsoft, the U.S. technology corporation which produces computer software, consumer electronics, personal computers, and a range of other services. The Xbox video game console is the most widely known product under the Xbox umbrella, with the first Xbox console released in North America in November 2001, and worldwide the following year. Since then, Microsoft has released a further four video game consoles – Xbox 360, Xbox One, Xbox Series X, and Xbox Series S. In addition to Xbox gaming hardware, the Xbox brand also consists of applications (games), streaming services, an online service by the name of Xbox network, and a development arm by the name of Xbox Game Studios.

The Xbox 360, the successor to the original Xbox console, was released in November 2005. Since its release, over 85 million Xbox 360 units have been sold, making it the most popular Xbox console of all time. Following on from the Xbox 360 came the Xbox One, first released in November 2013. This device was part of the eighth generation of video game consoles and competed directly with Sony’s PlayStation 4 console. The latest release of video game consoles includes the Xbox Series X and Series S consoles, high-end and low-end devices, respectively, that form the current generation of video game consoles alongside the PlayStation 5 and the Nintendo Switch.

Of the all-time sales of video game consoles, Microsoft registers just one device, the Xbox 360, in the top ten. Looking more closely toward the top of the list, Sony registers three of its products in the top five, with Nintendo’s DS and Game Boy devices making up the rest. In terms of lifetime sales, Sony has sold over twice as many of its PlayStation 4 consoles when compared to the Xbox One – a trend that is expected to continue with the latest generation of PlayStation and Xbox consoles.
This text provides general information. Statista assumes no liability for the information given being complete or correct. Due to varying update cycles, statistics can display more up-to-date data than referenced in the text.
Published by Statista Research Department, Oct 28, 2022 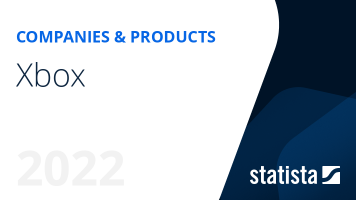 The most important key figures provide you with a compact summary of the topic of "Xbox" and take you straight to the corresponding statistics.