Of the all-time sales of video game consoles, Sony registers three of its products in the top five, with Nintendo’s DS and Game Boy devices making up the rest. Other competitors include Microsoft’s Xbox console family, although Sony has sold over twice as many of its PlayStation 4 console when compared to the Xbox One. This is a trend that is expected to continue with the next generation of PlayStation and Xbox consoles.

In the following 6 chapters, you will quickly find the 35 most important statistics relating to "PlayStation".

The most important key figures provide you with a compact summary of the topic of "PlayStation" and take you straight to the corresponding statistics. 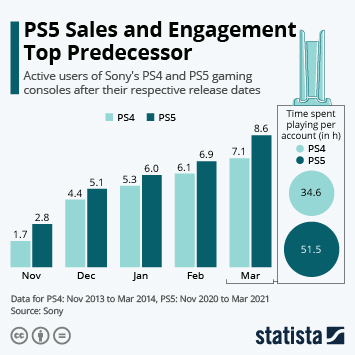