17 years ago, on February 4, 2004, then-19-year old Harvard student Mark Zuckerberg, along with some of his classmates, launched a little website called Thefacebook.

"Thefacebook is an online directory that connects people through social networks at colleges", the original website greeted its visitors back then, explaining that it would enable them to "search for people at your school, find out who are in your classes [sic], look up your friends’ friends and see a visualization of your social network."

Confined to the Harvard campus at first, the service quickly gained popularity and was subsequently rolled out to other colleges. By the end of 2004, Thefacebook had more than 1 million registered users and the newly-founded company behind it had not only moved to Silicon Valley but also secured a $500,000 investment from PayPal co-founder Peter Thiel. After changing its name to just "Facebook" in 2005, the social network was opened to the general public in the fall of 2006, marking the start of one of the most remarkable growth stories in corporate history.

Within three years, the social network added 350 million users. In the summer of 2012, it became the first online service of its kind to reach 1 billion monthly active users.

Despite being shrouded in controversy over its (mis)handling of user privacy and its questionable role in political manipulation in the United States and abroad, Facebook continues to grow. By the end of 2020, Facebook's monthly active user base had grown to 2.8 billion users. 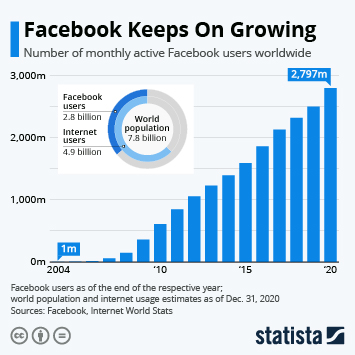