88.9k
At the beginning of his presidency, Donald Trump signed an executive order stating that an extra 5,000 Border Patrol agents should be hired to bolster the existing 20,000 currently working to restrict the flow of illegal aliens and goods into the country. Since Trump's rise to the White House, the topic of Mexicans coming into the country via the southwest border has been much discussed, and in some quarters, fretted over.

As our infographic shows though, the situation at the border has changed drastically in recent years. Back in fiscal year 2007, Border Patrol agents apprehended 800,634 illegal aliens from Mexico, compared to just 58,004 from other countries. Fast forward to 2016 and the numbers coming from Mexico have decreased massively to just 190,760. Other countries, on the other hand, accounted for 218,110 apprehensions.

So, while the origins of people attempting to enter the country via the southwest border have changed, so has the amount of people in total. In 2007 there were 858,638 apprehensions, compared to just 408,870 last year. It would surely then be reasonable to ask if the extra 5,000 agents are actually necessary. As outlined in a new report by Homeland Security though, the scale of the required recruitment process may render the plan impossible, regardless of its merit. 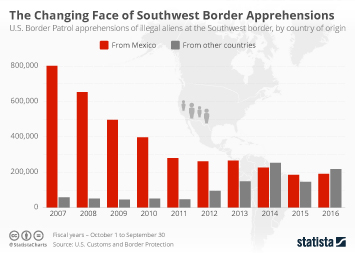 This chart shows U.S. Border Patrol apprehensions of illegal aliens at the Southwest border, by country of origin.