Skip to main content
53k
74.6k
87k
88.9k
After a relatively slow start, sales of hybrid vehicles in the United States have really taken off. The very first hybrid models were imported to the United States and went on sale during the late 1990s. Japanese firms led the way and still have a dominant grip on the market.

The Honda Insight was the first hybrid automobile to go on sale, though it was quickly joined and overhauled by the Toyota Prius. American firms struggled to compete with mass-produced Japanese hybrids, and the first home-grown examples only appeared in 2004 in the shape of the Ford Escape.

Since then, American vehicles like the Ford Fusion and Chevrolet Malibu have proven successful, but failed to wrestle away Japanese dominance of the hybrid market. In 2002, a total of 22,335 hybrid vehicles were sold in the United States – all imported models. By the end of 2012, the total amount sold had risen steeply to 431,798.

Of these, 114,291 were domestically produced while the majority, 317,507, were imported vehicles. Even though automobile companies in the United States are struggling to keep up with their Japanese competitors, Americans are driving more hybrids today, which is great news for the environment. 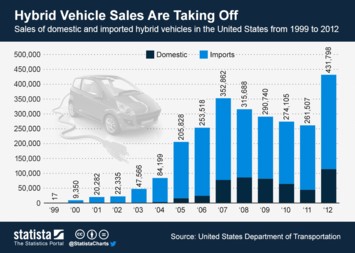 This chart shows sales of domestic and imported hybrid vehicles in the United States from 1999 to 2012.