88.9k
In the wake of the ongoing discussion about misinformation aka the spreading of “fake news” on social media and especially on Facebook, the company’s CEO Mark Zuckerberg announced significant changes to the way the news feed will work going forward. In an effort to re-focus on personal connections, Facebook users would find fewer news articles and less marketing content in their news feed and instead be shown more updates from their friends and families, Zuckerberg explained in a Facebook post in January.

While the company’s stated goal of making sure that “time we all spend on Facebook is time well spent”, sounds promising to the platform’s users, Zuckerberg’s announcement left publishers and shareholders concerned. While the latter worried about how the changes applied to the news feed would affect advertising sales, publishers feared a negative impact on their own websites’ traffic. Over the past decade, Facebook has been a significant driver of traffic to news websites, even beating Google as the main source of referral traffic for many of them. And while many publishers haven’t been happy about the social network’s prominent role in content distribution, most of them have come to rely on it nonetheless. A stronger emphasis on personal content in the news feed will almost certainly have a negative effect on Facebook’s role as a traffic source, a role that has already started to diminish.

According to a new report by Shareaholic, the percentage of website traffic coming from Facebook has already declined drastically in the second half of 2017. As you can see in the chart below, Facebook’s share of all visits to a sample of 250,000 websites has dropped from 30.9 percent in the second half of 2016 to 18.2 percent in the last six months of 2017. Shareaholic attributes the drop to a number of earlier changes that Facebook made to its news feed last year and to a general change in user behavior on the platform. 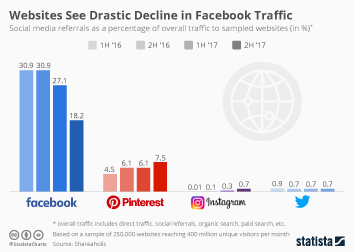 This chart shows how much traffic social media platforms drive to external websites.