88.9k
Shares of the largest American automakers dropped on Friday after President Trump announced that he’s planning to impose tariffs on Mexican imports starting June 10. “The United States will impose a 5% tariff on all goods coming into our country from Mexico, until such time as illegal migrants coming from Mexico, and into our country, stop,” Trump wrote on Twitter adding that the tariff would gradually be increased until “the illegal immigration problem is remedied”. The White House later explained that the tariff would gradually increase from the original 5 percent to 25 percent by October 1, unless Mexico takes action to reduce the flow of immigrants to the United States.

The reason that U.S. car industry shares dropped after the announcement is clear: not only do American carmakers manufacture a significant portion of the cars they sell in the U.S. south of the border, but Mexico is also the most important source of automotive parts. According to the U.S. Department of Commerce, the United States imported 2.66 million light vehicles worth a total of $52.6 billion from Mexico, plus another $59.4 billion worth of parts.

According to Deutsche Bank, GM, Fiat Chrysler and Ford import 29, 24 and 17 percent of the parts for its cars and trucks from Mexico, respectively, plus a double-digit portion of finished cars. Assuming the maximum tariff rate of 25 percent, the investment bank estimates that the big three automakers are set to lose between $3.3 billion (Ford) and $6.3 billion in pre-tax profit annually, unless they pass the costs on to consumers, which would result in price hikes between $1,600 and $2,400 per vehicle, according to Deutsche Bank’s estimates. American carmakers wouldn’t be the only ones hurt by the tariffs however, as virtually every major player in the industry produces cars for the U.S. market in Mexico. 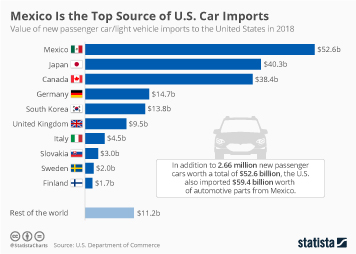 This chart shows the United States' largest import partners for passenger cars in 2018.