Skip to main content
53k
74.6k
87k
88.9k
Having already imposed tariffs on European steel and aluminum, the United States has intensified its trade dispute with the European Union by proposing new tariffs on goods worth $4 billion earlier this month. The newly proposed tariffs on goods such as meat, cheese, pasta and coffee could be added to a list of more than 300 products worth $21 billion in annual imports that the USTR proposed to be hit by tariffs in April.

The threats are related to a long-standing dispute between the United States and the European Union over airline subsidies, in which both parties accuse the other of unfairly subsidizing either one of the world’s two largest airplane manufacturers – Boeing and Airbus.

Unrelated to this dispute, President Trump has repeatedly criticized the EU for treating the US car industry unfairly, threatening to raise the tariff on European cars to 25 percent, from the current rate of 2.5 percent. The European Union currently imposes a 10 percent tariff on US cars, in fact creating an unlevel playing field for US car makers trying to sell American-made models to European markets.

As the following chart shows, automobile trade between the United States and the EU is a fairly lopsided affair. In 2018, the EU exported 1,155,488 cars worth $43.1 billion to the US, while the US shipped 267,653 cars worth $6.3 billion to the 28 EU member states. In an interview with German newspaper Welt am Sonntag, Germany’s Secretary of Commerce Peter Altmaier said that the EU would be open to dropping the levy on American cars altogether, but only if it comes as part of a broader tariff agreement. 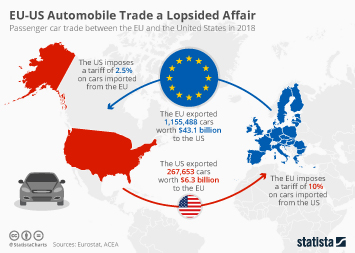 This chart shows key figures on passenger car trade between the EU and the United States in 2018.