88.9k
Hoping to build on its success with short-form videos in Instagram Stories, the Facebook-owned social media platform announced a new app for long-form video on Wednesday. IGTV, as the app is called, will allow creators to produce 4k videos in a vertical format strictly optimized for mobile viewers.

It will also enable users to produce videos longer than the current limit of 60 seconds, a move that can be interpreted as a direct attack on YouTube, currently the most popular video platform for influencers and video bloggers. While there won’t be any ads on IGTV in the beginning, Instagram CEO Kevin Systrom said that advertising “is obviously a very reasonable place to end up”, adding that “there will be a way for creators to make a living”, which will be essential if his company wants to lure some popular vloggers away from YouTube, where they can make a fortune.

As the following chart illustrates, it makes sense for Instagram to open up to long-form video. According to data from Ooyala, a video analytics firm collecting a ton of video consumption data on behalf of its customers, long-form video (20+ minutes) accounted for 54 percent of total video consumption on smartphones in the first quarter of 2018, up from just 29 percent two years ago. 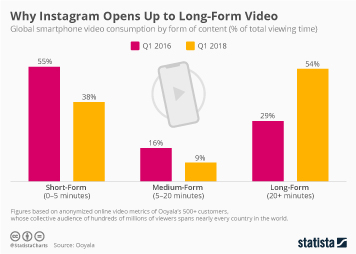 This chart breaks down global smartphone video consumption by the form of content.