88.9k
Japanese consumers love products made by U.S. tech giant Apple. That love doesn’t just apply to smartphones but to wearables too. As a recent report by IDC Japan shows, more than one quarter of wearables shipped in Japan last year were manufactured by Apple, who held the largest share of the domestic market. Japanese makers Epson and Sony ranked third and fourth, contributing to shares of only around 16.4 and 7.8 percent, respectively. Trying to keep up with their overseas competitors, Japanese companies once again struggled to maintain or even expand their technological lead, revealing another parallel with the smartphone industry.

Fitness trackers, for example, invented by a Japanese professor who tried to find ways to combat obesity, were introduced in Japan as early as 1965. By counting steps, the “Manpo-kei” pedometer was to help people reach 10,000 steps per day, and ultimately achieve weight control and fitness. Back then, the world didn’t seem to be ready. Today, while the fitness tracker market is booming worldwide, only a few people have even heard of the company - Yamasa Corporation - that introduced the Manpo-kei.

However, since there is a great variety of wearables, such as smart watches, smart glasses, health monitoring wristbands and other devices users wear on their bodies, there are many more business opportunities for Japanese companies to engage in. Also, Japanese scientists are not getting tired of finding new technologies: wearables that know how your pet is feeling or the most recently developed hypoallergenic wearable electronic sensors are just two examples of Japanese research activities. In light of the demographic change and the country’s rising healthcare expenditures, wearables for preventive healthcare have lately been garnering attention, offering a high market potential for smart devices. 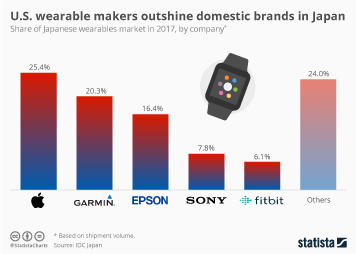 This chart shows the share of the Japanese wearables market in 2017 by company.