Over the past decade, the Internet of Things has developed from a future vision to an actual part of our everyday lives. From TVs to fridges, vacuum cleaners and cars – countless devices are now connected to the internet, and many of them can be controlled by voice. Voice assistants such as Amazon’s Alexa or Google Assistant have emerged as a primary interface between people and their connected devices and the companies controlling these interfaces hold a significant amount of power.

Acknowledging this power, the European Commission has launched an investigation into voice assistants and the internet of things, aiming to ensure that the market stays open and competitive. “Competition in digital markets can be fragile,” Margrethe Vestager, Executive Vice-President of the Commission wrote in an official statement. “When big companies abuse their power, they can very quickly push markets beyond the tipping point, where competition turns to monopoly.” As part of its inquiry, the EC will send questionnaires to about 400 companies that sell smart home appliances, wearables and voice assistants, with a special focus on how data is collected, used and possibly monetized. “Voice assistants and smart devices can collect a vast amount of data about our habits. And there's a risk that big companies could misuse the data collected through such devices, to cement their position in the market against the challenges of competition.”

Having made a name for herself by going head-to-head with U.S. tech giants, it’s pretty clear that Vestager will be looking at Amazon and Google in particular, as the former’s Alexa and the latter’s Google Assistant dominate the voice assistant market. According to the latest Voice Platform Impact Ranking by industry tracker Voicebot.ai, those two are by far the most important platforms in today’s market landscape. Rather than consumer adoption, the rating gauges adoption and expressed intent by industry professionals to support the respective ecosystems, and as such is an even better indicator of market power than hardware sales or market share alone. Ever since its introduction in 2014, Amazon’s Alexa has grown its global footprint, quickly expanding from Amazon’s own hardware to what are now tens of thousands supported devices from various manufacturers. 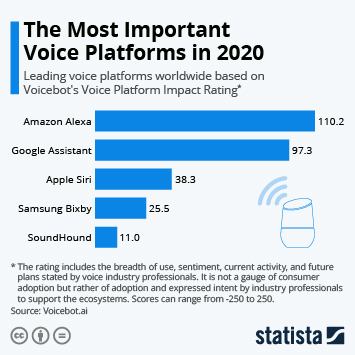 The next big thing in tech?