Fitness and activity trackers are electronic wearable devices that monitor health-related metrics such as walking or running, heart rate, blood oxygen levels, calorie consumption, and sleep quality. Fitness and activity trackers mostly come in the form of wristbands, although they can also appear as clip-on devices, earbuds, or clothing made of smart fabric. Besides being a standalone device, it can also exist in the form of a fitness app as software often installed on smartphones utilizing the device’s built-in components to keep track of certain activities.

In the beginning, there was a clear divide between smartwatches  - when they were solely an extension of a smartphone screen - and fitness trackers that had sensors that relayed activity data to a smartphone. However, these two devices converged when smartwatches leaned towards integrating sensors for tracking activity, as we see in one of the most popular smartwatches, the Apple Watch. The smartwatch serving the purpose of a fitness or activity tracker has resulted in the decline of devices specifically designed to help as an activity tracker, albeit their advantage of being more compact with longer battery life over smartwatches.

Fitbit had long been the leader in the wearables industry in terms of unit shipments, but it lost its top position to Apple back in 2017, before being acquired by Google in 2021. Apple has been the leader ever since, with about 162 million wearables shipped in 2021, while Xiaomi, Huawei, and Samsung recorded lower numbers. Indeed, when asked what brand their smartwatch or fitness tracker was, most American consumers and British consumers answered Apple, whereas Spanish consumers owned Xiaomi devices primarily. Finally, many fitness and sports apps are available for such devices on Apple App Store and Google Play Store, where Home Workout was the most popular, with over 2.9 million downloads worldwide in early 2022.
This text provides general information. Statista assumes no liability for the information given being complete or correct. Due to varying update cycles, statistics can display more up-to-date data than referenced in the text. 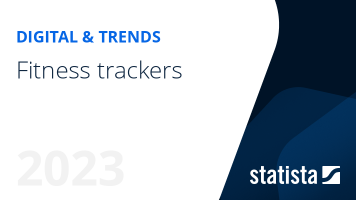 The most important key figures provide you with a compact summary of the topic of "Fitness trackers" and take you straight to the corresponding statistics.