Philips, Shell, Heineken and KLM are all international companies operating on the global level, but what they have in common is that they were all founded in the Netherlands. Today, these four are some of the most famous brands of Dutch origin, household names not just in the Netherlands, but also far across the border.

Comparing these Dutch brands on 3 of the 15 characteristics monitored, it shows first and foremost that all received more positive than negative press on these topics between January 1 and December 31, 2018. It also reveals some differences. The media relatively frequently addressed Philips' quality (19.6 percent of all media statements about the electronics concern), and negative perceptions were relatively rare (only 0.9 percent). By comparison, airline KLM's quality was the subject of just over 13 percent of all media statements about KLM, but nearly two percent of these statements were negative.

Oil company Shell sometimes receives harsh criticism on the topic of corporate responsibility, and that is clearly visible here as well, with Shell scoring relatively low on 'responsibility'. The bad press for Shell is much higher than that of any of the others: 1.7 percent of all statements vs. less than 0.5 percent for KLM, Philips and Heineken. The latter is also the clear winner of the popularity contest: nearly ten percent of all media statements about Heineken addressed the beer manufacturer's popularity, and virtually none were negative. 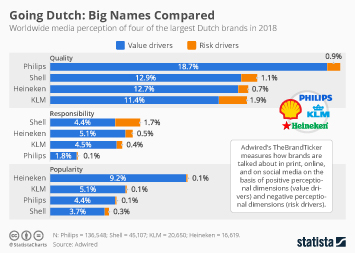 This infographic displays the worldwide media perception of four of the largest Dutch brands in 2018.