Social media has become one of the most relevant marketing channels of the past few decades. All around the world, brands and companies are implementing social media strategies into their digital marketing campaigns to boost brand awareness, increase exposure, and improve sales. In addition to traffic growth and lead generation, one of the most significant benefits of using social media for marketing purposes is communication: Not only does the growing number of social network users provide marketers with the opportunity of reaching large potential audiences, but the very concept of social media also enables brands of all sizes to interact with customers and drive user engagement on a never-before-seen level.

Leading brands and publishers on social

Brands across various industries are tapping into the vast potential of social media. In the United States, some of the leading brand industries on social media include publishing, media, and entertainment, with content produced by these industries accounting for more than 70 percent of all social media actions. Looking at individual players, sports, music, and entertainment companies generate the highest number of reactions, comments, shares, and likes for owned video content on social. As a case in point, the leading U.S. brand based on user engagement is The Shade Room, an entertainment media brand focusing on celebrity news. On a global scale, Instagram and Spotify top the list of most loved brands on social media based on mentions and engagement.

Due to its ubiquity and immense reach, Facebook remains the leading social media platform used by marketers worldwide. Since launching in 2004, the social network has transformed the digital marketing landscape and helped drive user engagement for many of the world’s most recognizable brands. In 2020, Samsung and Coca-Cola were among the most popular brands on Facebook, with 160 million and 107 million fans, respectively. Unlike other leading social media platforms, however, Facebook did not see a growth in brand video engagement in recent years, indicating that online audiences are increasingly turning their attention to other platforms.

According to a recent survey, 36 percent of U.S. social media users use Instagram to follow brands and companies, which can be explained by the platform’s appeal to younger audiences and its focus on visual content. While Facebook accounted for 23 percent of brand content interactions on social media in the United States in 2020, Instagram’s share rose to an impressive 67 percent, making it one of the most powerful channels for brand advocacy in the country. In 2019, The Shade Room was the leading U.S. brand on Instagram with close to 2.7 million likes and comments. Since then, the app has taken social media commerce to a new level by adding a shopping tab to its navigation menu. Whether this step resonates with audiences is yet to be seen.
This text provides general information. Statista assumes no liability for the information given being complete or correct. Due to varying update cycles, statistics can display more up-to-date data than referenced in the text.
Published by Statista Research Department, Jan 6, 2023

U.S. user interactions with brand content on social 2020, by platform 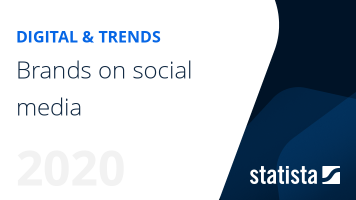 The most important key figures provide you with a compact summary of the topic of "Brands on social media" and take you straight to the corresponding statistics.