88.9k
Airbnb is making a dent in the lodging market, with nearly a fifth of consumer bookings going through the service in the United States in 2018. Major hotels made up around 70 percent of consumer bookings, a drop from 94 percent five years ago. In that same span of time, Airbnb has managed to go from three percent of the market to nearly 20 percent.

Airbnb has made a name for itself among investors as a hotly anticipated IPO. The organization reached unicorn status in 2011 and was valued at $10 billion by 2014. The peer-to-peer room sharing service has recently run into regulatory issues, in cities like New York, that have cracked down on people using the platform to rent apartments full-time under the guise of a short-term lodging accommodation. In response to these mounting concerns from regulators and investors, Airbnb has broken into the more traditional hotel market, acquiring HotelTonight, a last-minute hotel booking site, and offering boutique hotel options through its platform. Both moves signal the company’s willingness to evolve and diversify its revenue, moving from a room sharing service into more of a hybrid hotel-lodging company.

Second Measure, a technology firm, analyzed the anonymized purchases of billions of dollars in U.S. debit and credit card purchases. Airbnb revenue represented on this chart includes lodgings and experiences, or any service sold through its platform and billed to customers. Major hotel revenue in this chart contains room prices and incidentals, or any cost that ends up on the final bill. People traveling from outside of the U.S. or using corporate accounts are not counted in the data. 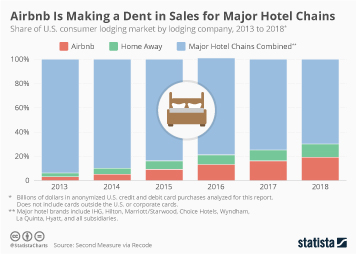 This chart shows the breakdown of the U.S. consumer lodging market by lodging company between 2013 to 2018.