Skip to main content
53k
74.6k
87k
88.9k
One thousand and twenty-three lawsuits dealing with climate change were filed in the U.S. court system between May 2018 and May 2019, according to the Grantham Institute. There were about 205 times less climate change cases in Germany, which saw only five climate cases over that same time frame. Out of all the global climate change litigation in the works, three-quarters of that legal legwork came from the U.S.

The Grantham Institute reviewed 873 climate suits in the U.S. between 1990 and 2016. Even though the U.S. makes up a bulk of climate change litigation worldwide, over those two and a half decades about a third of those cases have led to outcomes that hinder climate change regulation, while just a quarter of rulings favored regulation.

Most of the non-U.S. climate change litigation happening in Australia, the UK, and the EU center around greenhouse gas emissions reductions/trading, and environmental assessments/permitting. The Grantham Institute found that in non-U.S. cases between 1994 and 2019 about 43 percent of those cases bolstered climate change regulation while just a little over a quarter of cases hindered climate change law.

In both the U.S. and non-U.S. judicial system, nearly all climate change litigation is brought against governments, meaning the clout and outcomes of these decisions have huge consequences for how climate change law plays out for millions of people. 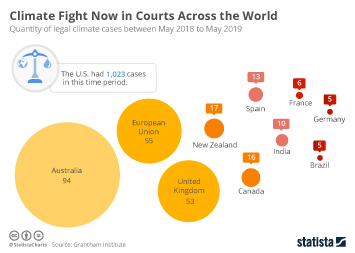 This chart shows the quantity of legal climate cases between May 2018 and May 2019.