Skip to main content
53k
74.6k
87k
88.9k
News apps are few and far between on the smartphones of people under the age of 35, according to a recent study by the Reuters Institute.

Reuters tracked the digital footprint of twenty people between the ages of 18 and 35 in New York and London. Every participant had a Mail app, a search engine like Chrome, and social media apps as well, with WhatsApp, Instagram and Snapchat appearing on all twenty phones in the study.

News apps appeared on far fewer phones. Only one person had the Wall Street Journal app, while another person just had the CNN app. The New York Times, Guardian, and BBC apps each appeared on two people’s phones. Even when news apps were on people’s phones, they made up a small percentage of young people’s daily time on their phones. No news app was in the top 25 for apps used daily, outside of Reddit.

News publishers are adapting to the digital ecosystem. Younger audiences primarily use digital channels to get news, meaning publishers need to have long and short videos, images and social media-friendly content ready for distribution to reach and engage this demographic. News publishers can win over young audiences by syncing stories up, in terms of tone and style, with the platform they are being distributed on. 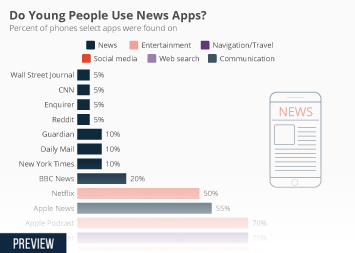 This chart shows the percent of phones select apps were found on.