Skip to main content
53k
74.6k
87k
88.9k
In 2017, we put together an infographic about the price of an AK-47 on the black market and the weapon had an average cost of anywhere between $1,135 in Belgium and $2,100 in Syria. Calibre Obscura, a fascinating website and Twitter account devoted to research on arms in the hands of non-state groups, has now published data on the average price of an M16 in various countries.

Focusing on the Middle East and North Africa, the price levels are based on local sources, focusing on the M16A2 and A4 variants of the American assault rifle in late 2019. Those weapons end up on sale in a variety of ways from the Taliban capturing them from Afghan army and police units to those same security forces themselves deciding to sell their weapons to various groups. It is also likely that U.S.-manufactured weapons have been captured from Saudi forces in the Yemen conflict where they have subsequently gone on sale.

Across the Middle East and North Africa, the gun has the highest average price in Tripoli where it is said to cost in excess of $12,000, though it is thought to be practically unobtainable there. Elsewhere, it's far cheaper, however, fetching between $2,500 and $3,000 in parts of Yemen. In Helmand province in Afghanistan and Idlib in Syria, the weapon can be purchased for less than $1,000. 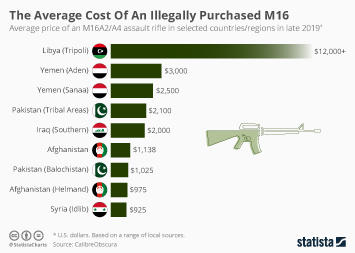 This chart shows the average price of an M16A2/A4 assault rifle in selected countries/regions in late 2019*.

Firearms in the U.S.