The 117thU.S. Congress has officially started, with Democrats retaining a slim majority in the House while the Senate is still up for grabs in anticipation of a runoff election for two Senate seats in Georgia on Jan. 5. Demographically, much of the House and Senate are similar in many ways to the 116th Congress. This may be most apparent in religious affiliation, with data showing how a substantial majority of representatives remain Christian.

According to the Pew Research Center, over 88 percent of the 531 current members of Congress practice some denomination of Christianity. The largest among them are Protestants, representing over 55 percent of all congressional members, followed by Catholics with nearly 30 percent and Jews comprising a little over 6 percent of the total legislative body.

These religious affiliations in Congress are nearly identical to the 116th congressional body. The largest difference came in a 16-member increase in those identifying as an unspecified or other form of Protestantism. All other religious affiliations saw little to no change overall in representation within Congress. This is in large part due to the fact that 464 out of 531 current members are returning from the previous body.

Most of the differences in religious affiliation occur within the Democratic Party. Roughly 99 percent of all Republicans identify as Christian, while 78 percent of Democrats in Congress identify as the same. Both numbers are well above the 65 percent of Americans who affiliate with Christianity.

Overall, according to Pew, the last 60 years of congressional bodies have seen very little change in religious affiliation; Christianity continues to be the dominant religion practiced by most congressional members. The notable change over the last six decades is the decrease in Protestant members in favor of Catholic members. Catholic elected officials in Congress have trended upward by over 50 percent since 1960, while Protestant members have seen an inversely downward trend over the same period. 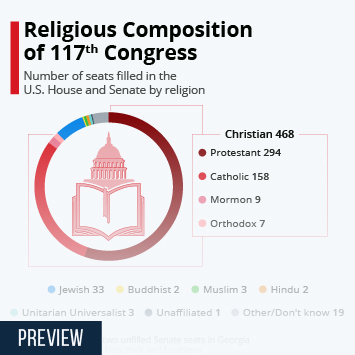 This chart shows the number of seats filled in the U.S. House and Senate by religion in 2021.

GDP Around The World