While the U.S. and European Union countries are lamenting a massive slowdown in the pace of new coronavirus vaccinations, countries in Asia and Latin America are keeping up the pace, coming into range to overtake these earlier adopters of the vaccine for the share of the fully immunized population – or having already done so.

Japan and South Korea, which were the face of ill vaccination success for most of 2021, have now vaccinated a higher share of their populations than the United States and the European Union, at a vaccination rate upwards of 75 percent each. As the New York Times reports, vaccines have proven less controversial in Asia-Pacific, with anti-vaccine movements remaining small.

Brazil is in a similar situation – its vaccination rate climbed faster than that of the U.S. and EU countries. At 60 percent of the population vaccinated, the country has also overtaken the United States for the share of the vaccinated population and might zoom past the EU next.

Examples like India and Colombia show that despite high achievers in COVID-19 vaccinations present on both continents, the reality might look different from country to country. At a 46 percent vaccination rate, Colombia is climbing on but has a way to go. India - which celebrated its 1 billionth vaccination dose given out last month - is approaching a third of its population immunized and is progressing on a somewhat slower trajectory.

Africa, finally, is the least vaccinated continent, with even major economies like Kenya having vaccinated less than 5 percent of their populations. 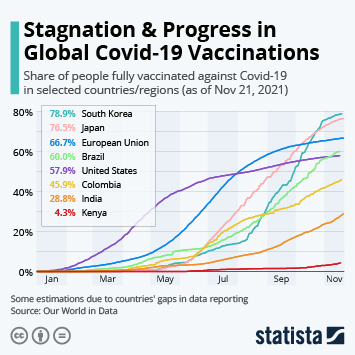 This chart shows the share of people fully vaccinated against COVID-19 in selected countries (as of Nov 21, 2021).