On October 23, 2011, Libya was declared liberated from the regime of Muammar Gaddafi, marking one of the key events of the Arab Spring. Ten years after the wave of pro-democracy protests swept the region, some countries have improved their scores on the Economist Intelligence Unit Democracy Index, while hopes of creating a more egalitarian society were quashed elsewhere.

Even among countries which experienced a toppling of their government in connection with the Arab Spring, outcomes are widely differing ten years later, highlighting the volatility that can come with sudden political change.

Tunisia, where the government of President Zine El Abidine Ben Ali was overthrown in the beginning of 2011, achieved a rating of 6.59 out of 10 in the 2020 index, climbing 90 ranks since 2010 while being named the 54th most democratic country in the world. On the other hand, there is the tragic story of Yemen were chaos reigned in the aftermath of government overthrow. After the fall of two governments in 2012 and 2015, Yemen descended 11 ranks into the bottom ten of the world’s least democratic countries. Tunisia’s success has, however, been overshadowed by a governmental crisis in which the current President Kais Saied has suspended the parliament since July, showing the persistent fragility of democratic systems in the region.

Libya stagnated near the end of the list, now sharing a rank with Yemen at the dismal democracy score of 1.95 out of 10. Despite a protracted crisis which saw government overthrow in 2011 and 2013, Egypt also stagnated, if at a somewhat higher score of 2.93. In Syria, dictator Bashar al-Assad resisted a change of power with all force, causing a civil war that killed hundreds of thousands of people to-date and caused the country to now be ranked as one of the five least democratic in the world.

Two more countries in Northern Africa, Algeria and Morocco - where protests, but no direct governmental changes took place – nevertheless made democratic gains according to the EIU. While Algeria rose ten ranks to a score of 3.77, Morocco climbed even more, by 20 spots between 2010 and 2020, to a score of five out of ten, equaling rank 96 of the world’s most democratic nations. 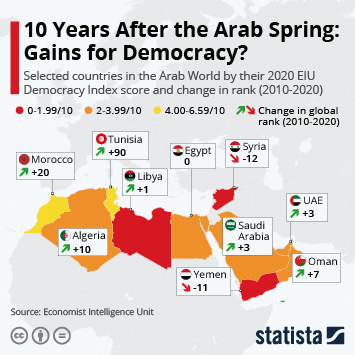 This chart shows selected countries in the Arab World by their 2020 Economist Intelligence Unit Democracy Index score and change in rank (2010-2020).