Workers who engage in outdoors heavy labor are already putting a big strain on their bodies. With global warming progressing, carrying out this type of work is set to become seriously unsafe or simply impossible to do in hot and humid countries, causing the need to break for the hottest hours of the day. Even if laborers would continue to work through the midday or afternoon heat, they would be expected to work at a slower pace.

In India, which still has a large heavy labor sector, this could entail the loss of the equivalent of 437 billion work hours annually if the globe should warm by 4° C. A warming of this magnitude is expected if the world continues on its current trajectory of greenhouse gas emissions. If the world sticks to its climate goals and policies, a warming of 2°C to 3°C can be expected.

Researcher of a study published in Nature Communications in December estimate that the current loss of heavy labor work hours due to heat in India stood at around 100 billion hours annually. Depending on the climate models used, it could already be as high as 259 billion hours, the same researchers said in January. According to the second study, a loss of 100 billion Indian heavy labor work hours is equal to the loss of around $240 billion adjusted for purchasing power parity.

In China, which has a similar population to India, only 21 billion to 72 billion work hours are estimated to currently be lost to global warming, as the country has transitioned away from heavy labor industries like agriculture and manual construction. Other countries with large overall losses are Bangladesh, Pakistan, Indonesia and Sudan. The countries which are most affected in relative terms due to heavy labor taking up large shares of their economies are Qatar, Bahrain and the UAE. 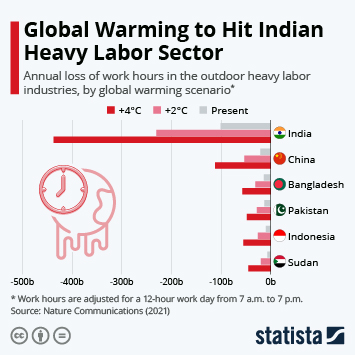 This chart shows the annual loss of work hours in the outdoor heavy labor industries, by global warming scenario.