The Indian government on Monday banned 54 more mobile applications, bringing the total tally of apps banned in the country since June 2020 to 274, according to The Indian Express.

Back in mid-2020, the move made international headlines as Chinese-owned TikTok was among the banned apps. In the meantime, prominent platforms like WeChat, Shein, Weibo, Baidu, PupG Mobile, Alipay and AliExpress have ceased to be officially available in India.

The bans are put upon apps the Indian government believes do not shield user data from the Chinese government appropriately by using Chinese servers, which is illegal under Indian law. The bans have, however, also coincided with Indian-Chinese clashes on the Ladakh/Sikkim-Tibetan border.

While the bans have mostly affected Chinese-owned apps, developers from other countries have also found themselves on the bans list if they are suspected to operate on Chinese servers, for example through Chinese stakeholders. Popular game Garena Free Fire by Singaporean company Sea Ltd. has been banned since Monday because the company is partly owned by Tencent. Sea Ltd. said it had complied with Indian law, according to Reuters.

Games like Free Fire are actually a very common type of app to be banned in the current Indian crackdown, as an analysis of Google Play Store data by Statista shows. With China being a huge contender in the mobile games market, almost a quarter of banned apps over the last two years have been from that category. This is only beat by 25 percent of banned apps being listed as tools, including browsers, mail programs, personalized interfaces and organizational apps. Like another commonly banned category - social media and dating at 18 percent – many of these apps have the potential to collect a large amount of personal data on their users.

Very few apps came from the realms of business, shopping or payments. Indian consumers also have to do without several apps offering picture and video editing for social media, a genre popularized by the Chinese market. 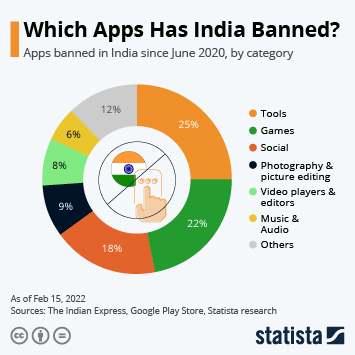