Countries feeling an historical threat from Russia have in the past decade upped their expenditure on defense. Some of the biggest spending increases could be seen in Lithuania, Latvia and Ukraine, while Moldova (+44 percent) and Estonia (+37 percent) have also spent more. This is according to data by the Stockholm International Peace Research Institute.

Despite the steep increases, the share of GDP spent on defense was in line with the NATO goal of 2 percent in the Baltics, which are NATO members. Georgia spent about as much, while Moldovan defense expenditure remained low in relative terms at just 0.4 percent of GDP.

Ukraine is an outlier in the sense that it spends more than 4 percent of GDP on defense – about as much as Russia. While Russian expenditure fluctuated between 3 and 5 percent of GDP in the past decade, that of Ukraine had to increase majorly to reach the 4-percent mark – from just 1.5 percent in 2011.

The NATO goal of 2 percent has been a contested issue in Europe as many major economies on the continent have spent much less in the past. Germany has been working on upping its spending and reached 1.4 percent in 2020. Only nine out of the 28 European NATO members reached the 2-percent goal that year. In addition to the Baltic countries, these were Romania, the UK, Poland, Portugal, France and Montenegro. Those earmarking less for defense over the past decade were typically heavy spenders – like the U.S. and Saudi Arabia – where defense spending remained high as a share of GDP regardless. 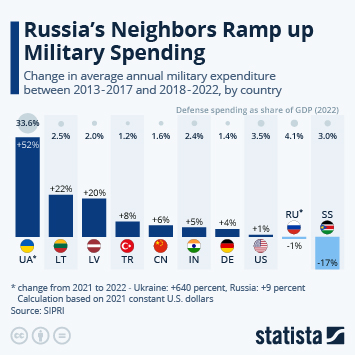