Published by Statista Research Department, Feb 16, 2022
The global hair care market value amounted to about 85.5 billion U.S. dollars in 2017 and is expected to grow to 102 billion dollars by 2024. Despite the fact that the Asia Pacific region has the largest market for hair care in the world, the United States has the most lucrative hair care market of any country in the world, generating about 15 billion U.S. dollars in revenue in 2017. Although many of the staples have remained the same for decades, the hair care market has proven that there is still room for innovation. Dry shampoo is a relatively new product on the market which coats the hair in an oil-absorbing powder to give the hair a fresher and cleaner appearance without the use of water. The global market value for dry shampoo is expected to grow from about three billion U.S. dollars in 2017 to over four billion dollars by 2022.
In the United States the estimated value of the hair care market was about 47 billion U.S. dollars in 2016 and that figure is expected to grow to over 50 billion U.S. dollars by 2025. Although not everyone sees the point in using conditioner or hair styling products, almost everyone with hair owns a bottle of shampoo, hence the largest share of the U.S. hair care market is attributed to shampoo. In 2016, over 548 million units of shampoo were sold in the United States. The shampoo brand OGX experienced negative sales growth in 2017 compared to the previous year, despite being the top selling shampoo brand that year. Dove Nutritive Solutions experienced sales growth of upwards of 350%, making it the fastest growing shampoo brand of 2017.

In the following 5 chapters, you will quickly find the 42 most important statistics relating to "Hair care product and shampoo market in the U.S.". 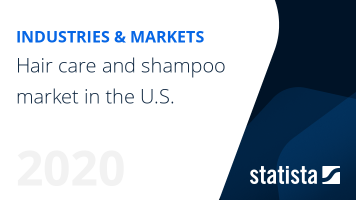 Go to report Hair care and shampoo market in the U.S.
Top Seller

The most important key figures provide you with a compact summary of the topic of "Hair care product and shampoo market in the U.S." and take you straight to the corresponding statistics.