Published by
Erick Burgueño Salas,
Apr 19, 2022
Delta Air Lines is a major U.S. air carrier, transporting passengers and cargo around the United States and international destinations in the Central and South America, the Middle East, Africa, and Europe. It was founded in 1924 and commenced operations on June 17, 1929.

The company is one of the oldest legacy carriers in the United States and was formed by the merger of legacy carriers such as Western Airlines, which was acquired in 1987, or Northwest Airlines, which was acquired in 2008, and others. Headquartered at the busiest airport in the world, the Atlanta-based company transports more than 170 million passengers every year with connections to some 321 destinations in the world.

The airline’s growth in providing passenger air transportation services can be seen in the increasingly operating revenues over the last years. However, due to the coronavirus pandemic, the U.S. airline saw a huge drop in revenue in 2020: from 47 billion U.S. dollars generated in 2019 to only 12.8 billion U.S. dollars. In that same period, the airline transported only 55 million passengers, had a seat capacity of only 134.4 billion available seat miles and a passenger load factor of 55 percent, the lowest in the recent decade.

In the following 5 chapters, you will quickly find the 28 most important statistics relating to "Delta Air Lines".

The most important key figures provide you with a compact summary of the topic of "Delta Air Lines" and take you straight to the corresponding statistics.

Passenger airlines in the U.S 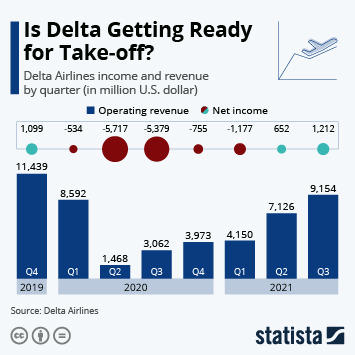